Today, Monday 23rd October 2017, Dame Natalie Massenet, Chairman of the British Fashion Council (BFC), Nadja Swarovski, Member of the Swarovski Executive Board and Caroline Rush, Chief Executive of the British Fashion Council announced the nominations for The Fashion Awards 2017 in partnership with Swarovski at a press screening at Soho House, 76 Dean Street, London.
The Fashion Awards in partnership with Swarovski recognise creativity and innovation in fashion, celebrating exceptional individuals whose imagination and creativity have broken new ground in fashion globally over the past 12 months as well as brands and businesses that have transformed the possibilities of fashion today.
Watch The Fashion Awards 2017 Nominees video created by Robin Derrick and Spring Studios here:

The Fashion Awards 2017 voting body represents media, retail, communications and creative disciplines such as photography, art direction, set design and production across 38 countries. 2000 key members of the fashion industry were invited to put forward their preferences for each category and nominations were made in nine categories with the five brands/individuals receiving the most nominations shortlisted in each category.
The Fashion Awards 2017 Nominees are (designers listed in alphabetical order):

Additional awards will be celebrated on the night, recognising incredible career milestones for individuals. The recipients of these special awards will be announced in November.
The Fashion Awards 2017 winners will be announced at a gala ceremony held at the iconic Royal Albert Hall, London, attended by 4000 industry members and invitees on Monday 4th December 2017. The event raises money to nurture future generations of fashion talent. The BFC Education Foundation is the charitable partner to The Fashion Awards 2017 in partnership with Swarovski and offers scholarships to talented young people to study at the best universities as well as opportunities to fund apprenticeships to develop much needed industry skills.
Dame Natalie Massenet, Chairman of the BFC, said: “I would like to congratulate all the nominees of The Fashion Awards 2017 in partnership with Swarovski. These designers and brands were chosen from hundreds of international names and they represent the most creative talent and innovative businesses of the year. I am thrilled to be welcoming them to London on 4th December at the Royal Albert Hall to celebrate their incredible achievements, alongside industry friends from the world over.”
Nadja Swarovski, Member of the Swarovski Executive Board, added: “We are delighted to announce the nominees for the 2017 Fashion Awards. These fantastic talents represent the very best of the global industry. We are excited to welcome the fashion world to London for the Awards in December, which will once again raise funds for the next generation of talent via the BFC’s Education Foundation. Young designers are the heartbeat of our business, and it is up to all of us to foster and champion their vision.”
The generosity and commitment of our sponsors is more vital than ever. Please help us by acknowledging our Principal Sponsor SWAROVSKI for their support of The Fashion Awards 2017. Presenting Sponsors American Express, Place Vendôme Qatar and Official Sponsor Mercedes-Benz. 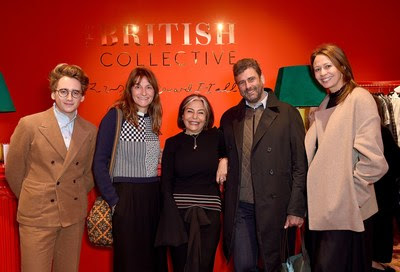